Romer Alone: Was she pushed? 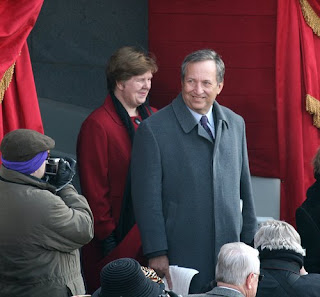 Obama's top economic advisor, Christina Romer, calls it quits and goes back into the private sector.  She will still be a private consultant for the president.  She has proven herself to be very conflicted, in 2007, she wrote a paper that states that any a 1% tax increase will lead to a 3% decrease in growth rate over three years, via Berkeley page 2:


Our estimates suggest that a tax increase of 1 percent of GDP reduces output over the next three years by nearly three percent. The effect is highly statistically significant. The estimated impact is larger and more significant than when broader measures, such as the change in cyclically adjusted revenues or all legislated tax changes, are used.

This paper has recently been republished this June and has been in the press lately.  I smell a conflict of interest from an economic advisor that quits less than two years after she was hired.  After all, two years ago she was writing against tax increases, and now she has to shill for Obama's shaky tax policies.  In her paper she compares the stimulative effect of a change in GDP due to spending versus a change in taxes by stating the follow on page 8:


Fortunately, the spending declines are generally small relative to the tax increases.

So it is clear that she believes, or believed at one time, that tax cuts are better than spending increase to stimulate the economy.  But the past two years she has been stumping for huge spending increases and tax increases to get the economy going.  She said that the unemployment rate would stay below 8% if they enacted the stimulus.  She still says that it worked.

Now she says that she is going to quit for family reasons?  Via Swampland:


President Barack Obama's Council of Economic Advisers says she is quitting solely for family reasons and that the economic team works well even with its set of "strong personalities."

Christina Romer announced Thursday she is resigning her position effective Sept. 3 to return to the University of California, Berkeley, as an economic professor.

Romer told The Associated Press on Friday: "It was by far the best thing for the family."

It's more like she is quitting to let Summers take charge.  She has feuded publicly as she felt she did not have a seat at the table, via National Journal: