My last post Correlation of mortgage rates with real housing prices: how increasing inflation could affect housing prices, raised some questions. I didn't have the chance to respond to them.

But before I do, let me go back to the original purpose of the article. I asked the question, "What could happen to real estate in the event of higher inflation?" If inflation shot up from 1% to 7%, what would happen to the real value of your home. My thesis was: you're screwed. You will lose what little equity you have and real housing prices could drop by as high as 50%. 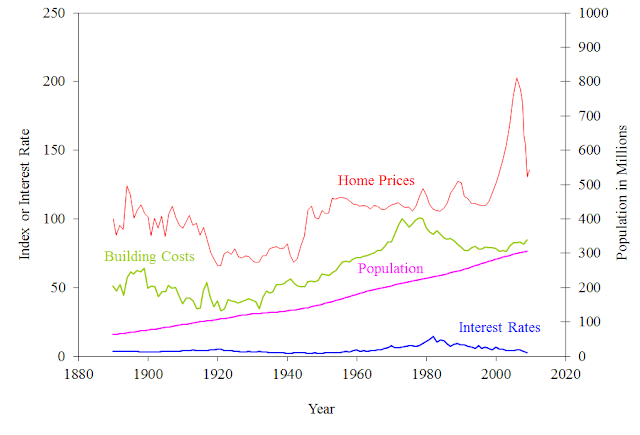 Once again, what is common to the man on the street seems to elude the academics, mainly, higher interest rates lead to lower affordability which in turn lead to lower housing prices. I looked at the same housing data as he did, but from a different perspective, mainly, the change in interest rates with the change of real housing prices. I looked at real vs nominal because there were periods of high inflation in the 70's during which, looking at nominal inflation would give a very distorted picture.

I also took an average of the three years forward because there is so much variability from year to year as to make the data difficult to interpret. The chart below tells a very convincing story. It doesn't take a genius to spot a trend. What really got the people going was the mirror image of the nominal rate against the housing prices from . It was so evident some folks suggested I cherry picked the data. Hardly. `

My own experience working as a mortgage trader during this time reinforces that assumption. Indeed, if ask about home price increases, without looking at interest rates they are only looking at half of the story. I place the start of the bubble in 2003. We had had some substantial housing price increases before them, but the interest rate was falling so I wasn’t so worried.

The aggregate effect pushed up home prices. Once those products went the way of the dodo, home prices dropped too.

I picked the dates for three reasons. The first was practical. I wanted mortgage rates, and I wanted one source to avoid disruptions. I had Freddie Mac mortgage rates from 1970 on and that seemed to give me enough data for me. I felt it important to actually look at the mortgage rate because credit spreads can change and people make pricing decisions based upon affordability, not the general interest rate of treasury bonds. However, if I were to present the same information with long term bond rates, it would look nearly identical.

Second, the graph of the time from 1979 to 1986 was also the most relevant to my thesis because it was a time of rapidly increasing interest rates. I am more interested in what could happen with rapidly increasing rates, and 1977 to 1982 are the perfect example. With small changes to the interest rate, the real housing prices are difficult to predict, but with a large change, it becomes very clear. I am more interested in large changes.

The third reason for choosing the time frame was because due to the magnitude in changes from 1979-1982, it makes the whole chart preceding 1970 relatively tiny in comparison and consequently more difficult to spot a trend. Below I have looked at the rates vs housing from 1900 to 1970 to make the trends more obvious and to make the dataset complete.  I have also added colors for for clarity.

There are two important things to understand from this data. First, the effect of changes in interest rates take time to work their way into housing. I showed up to a three year lag from the time that the interest rates change to the time real housing prices change. Second, we should not use the correlation matrices to forecast next year's prices. There is a lot of noise and a lot of other things that can have an effect on real housing prices. These interest rate trends take years to play themselves out. In the middle of a boom, we might have some years that prices go in the opposite direction. That should be clear.

But what should also be clear from this data is that going long on housing where inflation, and interest rates are increasing is not a wise bet. Long term interest rate trends tend to continue for a very long time so that once interest rates start to rise, it could be a very long climb to the top.

Another criticism of the article was that why worry about inflation in the middle of deflation? Well, I didn't make that argument. For now I'll rely on Gonzalo Lira to make that case. I stated in a previous posting on economypolitics.com, that it can take over two of years for of decoupling of M2 and GDP growth to lead to inflation.

And even though most experts say inflation is subdued, US import prices have increased by 4.1 percent over last year.  Could this be a sign of things to come?

For all you data hounds out there, download the data as I used it.
GDP Growth Housing Inflation