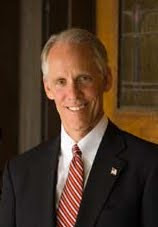 Anyone who follows economypolitics knows our belief in limited government. Public policy shapes culture. A free society will, not by design but as a byproduct, have a more responsible and industrious society. The trick of it all is finding individuals who are smart, capable and charismatic who are willing to defend freedom, instead of the endless nanny-state regulations and social tinkering which passes as legislation.
I recently had an interview with an individual who fits this profile, Christopher Barden, whom I know personally from my time living in Minnesota. He is running for Attorney General of Minnesota, in a state that had 40 solid years of Democrats occupying that spot.

Just to highlight the importance of the Attorney General position, it is a group of twenty state Attorneys General that are bringing a lawsuit against Obamacare. An Attorney General Barden would add Minnesota's voice in opposition. It would also add a legal voice with an expertise in Health Care.

It is also the Attorney General which is responsible for overseeing election law. If election law would have been followed more faithfully in Minnesota, we would not have a comedian as the Senator.

Question: What services or benefits should the State government provide? Which services should they stay clear of?

Answer: Public safety and jurisdictional security are key duties of government. Protecting the border, for example, is an important government function at the state and federal level. In general, state and local governments provide citizens with services otherwise not available, including but not limited to transportation infrastructure (roads, bridges, etc), public safety (police/fire), utilities (water systems), courts, and others. Government intervention should be limited as required by the constitution. In the past century, government has grown beyond its constitutional bounds and now threatens individual liberties. For example, the Federal Healthcare Law known as Obamacare claims the unprecedented power to order citizens to buy products (health insurance) under penalty of law. This is a power the government does not have, has never had, and should not have.

Question: In what ways, if any, has the Federal government overstepped its bounds (e.g. commerce clause)? What can you do about this as the Attorney General?

Answer: As noted above, the Federal Healthcare Law known as Obamacare claims the unprecedented power to order citizens to buy products (health insurance) under penalty of law. This is a power the government does not have, has never had, and should not have. As Attorney General, I would join the multi-state legal challenge to Obamacare. I have already spoken to many of the Attorneys General challenging the federal law and they are quite pleased at the prospect of having a Dr-Lawyer expert in healthcare law serve as an Attorney General and join the fight against the unwise and unconstitutional Obamacare law.

Question: We know that you are in favour of repealing if not all, certain parts of Obamacare, can you please explain which parts would you most like to see go?

Answer: The Federal Healthcare Law known as Obamacare claims the unprecedented power to order citizens to buy products (health insurance) under penalty of law. This "individual mandate" is a power the government does not have, has never had, and should not have. Upholding the individual mandate would give the federal government a nearly limitless police power, thus eviscerating the Constitution. This part of the Obamacare law is a danger to liberty and will be struck down by the Supreme Court on a 5 to 4 vote.

In addition, the Federal Healthcare Law known as Obamacare highjacks state budgets to pay for spiraling health care costs. Under the 10th Amendment, states have sovereign power over such budgets and should be able to spend state funds on roads and other essentials without being commandeered by the federal government.

Given the imprecise drafting of the Obamacare law, it is unclear how much, if any, of the law would survive a successful court challenge.

Question: As the Attorney General of Minnesota, what is your role in enforcing the law? We know that all laws are important, but as Attorney General, your time and resources are limited. Which laws would you most aggressively enforce?

Answer: The Attorney General is the one public official in Minnesota with the overall duty to ensure that the election laws are faithfully enforced and voter fraud prosecuted. I would vigorously defend the election laws of our state and work to implement a more effective Photo ID system to prevent voter fraud. Consumer protection laws are also important, especially where violations result in danger to the public. I would also work closely with local law enforcement to reduce violent crime which has escalated far more rapidly than population growth in Minnesota.

Question: What is the role of the state government in enforcing federal immigration laws? What can and should Minnesota do about this?

Answer: Public safety and jurisdictional security are key duties of government. Protecting the border, for example, is an important government function at the state and federal level. Precious tax dollars are too often misused in providing services to illegal immigrants. Another serious problem is that Minnesota's antiquated "vouching" election laws reportedly permit illegal immigrants to vote with ease. The Attorney General should defend the integrity of the election process by working with local county attorneys to prosecute and end voter fraud in Minnesota. Implementing a system where voters must present a Photo ID (driver's license, passport, or voting ID) is an excellent, inexpensive, well-tested, and effective method for reducing voter fraud and ensuring the integrity of the voting process.
Attorney General Chris Barden Crime election law Freedom Fighter Series Immigration Minnesota Obamacare