By EconomyPolitics - October 12, 2010
﻿Janet Yellen has long been thought as an inflation dove.  She has been one leading the charge for Quantitative Easing - Expanding the Fed balance sheet and thus creating money.  She has come out with a much less dovish stance in her first public remarks, via WSJ:

“It is conceivable that accommodative monetary policy could provide tinder for a buildup of leverage and excessive risk-taking in the financial system,” Yellen said in prepared remarks to the annual meeting of the National Association for Business Economics, or NABE, in Denver.

“Low interest rates might heighten the ability and desire of financial market participants to reach for yield and take on risk,” Yellen warned.

Banks do, in fact, make money off spread.  Spread is the difference between the price that banks pay on their liabilities (mainly deposits and CDs), and receive from their assets (mortgages, commercial loans etc).  All has been well and good because the yield curve has been steep, meaning that banks borrowed short term money and lent on the long end. 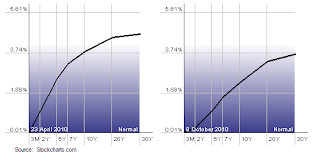 The Fed has been holding the short end of the curve near zero, which make spread investing even more attractive.  What hasn't so far been discussed is the grand scale redistribution of assets from depositors to banks.  As banks make their money off the spread, if the banks give depositors near zero, then, they can lend that money out at a much higher rate.

This causes malinvestment as banks have no reason to lend out their money to depositors, and instead, can make a much less risky spread by lending to the US gov't by holding US treasuries. It also steals money from the millions of depositors who otherwise would have gotten a much higher rate for their money.

But, as the Fed has been out there buying up longer term treasuries, they have no choice but to seek greater yield by taking on riskier assets.

She may be late to the party, but at least she has arrived.
Banks Janet Yellen Yield Curve