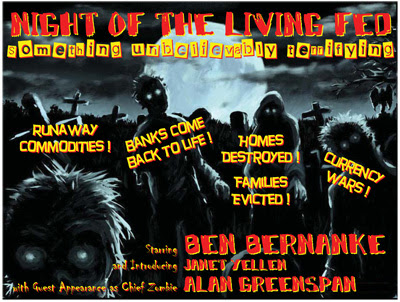 Zombies!!  That is what Fund manager Jeremy Grantham said the Federal Reserve is creating, likening its strategy of low interest rates and monetary easing to a Halloween horror movie that is dangerous and destabilizing to the economy. Via GMO:


Lower rates always transfer wealth from retirees (debt owners) to corporations (debt for expansion, theoretically) and the financial industry. This time, there are more retirees and the pain is greater, and corporations are notably avoiding capital spending and, therefore, the benefits are reduced. It is likely that there is no net benefit to artificially low rates.

Quantitative easing is likely to turn out to be an even more desperate maneuver than the typical low rate policy. Importantly, by increasing inflation fears, this easing has sent the dollar down and commodity prices up.

Weakening the dollar and being seen as certain to do that increases the chances of currency friction, which could spiral out of control.

In almost every respect, adhering to a policy of low rates, employing quantitative easing, deliberately stimulating asset prices, ignoring the consequences of bubbles breaking, and displaying a complete refusal to learn from experience has left Fed policy as a large net negative to the production of a healthy, stable economy with strong employment.