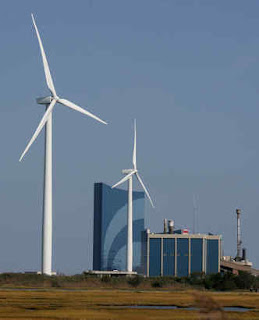 I`m not sure how I feel about this particular project.  Wind power is unreliable and requires heavy taxpayer subsidies.  I thought it interesting.  They have at least got some major backers, which means that it lessens the taxpayer burden so it may be viable, via philly.com:


Investors on Tuesday proposed to build an underwater electricity superhighway that would carry wind power generated off the Mid-Atlantic Coast to land.

The $5 billion transmission line, announced by backers including Google, would run about 15 to 20 miles offshore.

It would act like a spine, linking the offshore projects to land at four locations -- North Jersey, South Jersey near Atlantic City, the coast of Delaware and the coast of Virginia south of Norfolk.

"This is a huge, bold project," said Robert Mitchell, CEO of Trans-Elect, an independent transmission company operating nationwide, which is leading the project. "It's going to result in thousands of megawatts of offshore wind being delivered to the East Coast" along with thousands of jobs.

"Instead of multiple connections, this will serve as a superhighway with on-ramps for wind farms," said Rick Needham, director of green business operations at Google, a major investor.

It also would increase the reliability of wind, they said. By joining the projects together, the variability of wind at any one location is smoothed out, lulls in one place compensated for by gusts elsewhere.