The World's Bailer Outer: Fed shows that they are willing to bailout anyone with their commercial paper facilities, even foreign banks

By EconomyPolitics - December 02, 2010
The Fed has showed that the emergency programs which were created to keep US banks afloat during the economic crisis, gave much of their money to banks sitting in London, or Europe.  UBS, Dexia, Fortis, RBS and Barclays were among the top recipients of the $3.3 TT in Federal Reserve emergency cash which was used to buy commercial paper.  So US dough went to banks in Belgium, UK, Switzerland and the Nerthlands.  I know finance is global, but are bailouts global now too?  UBS borrowed almost twice as much as Citigroup the top U.S. bank recipient.  Via Bloomberg:


“We’re talking about huge sums of money going to bail out large foreign banks,” said Senator Bernard Sanders, the Vermont independent who wrote the provision in the Dodd-Frank Act that required the Fed disclosures. “Has the Federal Reserve become the central bank of the world? I think that is a question that needs to be examined.” 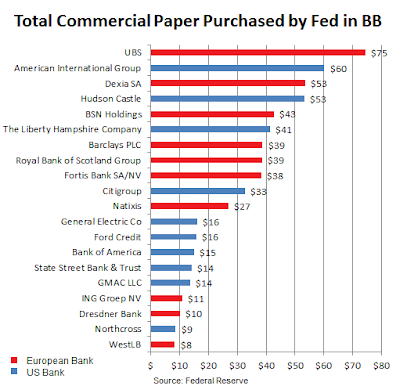