By EconomyPolitics - January 07, 2011
Credit market trading conditions for Spanish and Portuguese banks have been getting worse in the last 3 months of the year according to Moody's research.  This signals a potential downgrade.  Expect that to happen sooner rather than later.

Spanish and Portuguese banks are now among the worst in the world looking at the CDS market.  If Spain and Portugal guaranteed these banks, as they have yet to do, it would likely do nothing as the sovereign risk of these two countries is not much better.  Via Moody's: 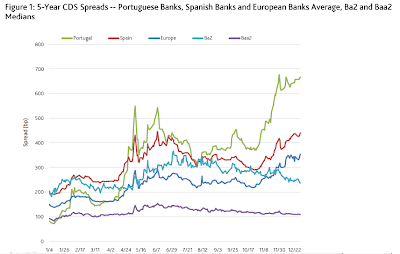