EconomyPolitics 2nd annual index of Economic Efficiency of the World

The top ten countries in terms of Economic Efficiency for 2011: 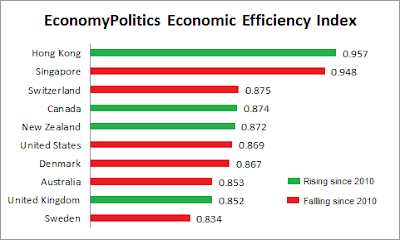 This is the first in a three part series where we identify the most attractive international investment opportunities for the next ten years. We start out by looking at economic efficiency, i.e. the fundamental freedoms and legal framework, which facilitates successful investing.

In doing country analysis for international investments, it is often a first step to look at sovereign bond ratings from Moody's, Fitch or Standard and Poors. However, many smaller developing countries get very little if any play at the agencies. CDS spreads, another measure of investor risk only covers 80 countries. Our index covers 124 countries. To do so, we have looked at business and freedom indices which assign values to sovereign attributes to gauge risk and assess opportunity. These indices attempt to measure economic freedom and a legal clarity.

There are plenty of indices by many different sources, each one looks at important factors which could influence returns and hurdle rates. But which index do you use? We have looked into four of such polls and compiled an index of indices to measure efficiency.


I have included information on five of such indices and compiled our own index of economic efficiency. The indices include:

To come up with an effective way of comparing the different indices, we first eliminated any countries that were not covered on all indices. We then scaled them, with the lowest country rank set to zero and the highest country set to one. Then their relative positions are weighted by the corresponding score, not the ranking. The indexes are all given equal weighting.

Culture matters within countries as well as regions. A constitution that protects individual rights and economic freedom means nothing without a culture which is willing to protect them.  We have split up the globe into spheres of influence, which may or may not correspond exactly to geographic boundaries.  For example, the Middle East, is actually splitup between Africa, Asia, and via Turkey Europe.

The region that is most free on the globe is North America.  With only two countries in this region, it is politically less diverse than other regions. The United States and Canada have actually flip flopped from last year where the US occupied the 4th place and Canada the 6th.    Heritage, the World Bank and Euromoney all place Canada as a freer place to do business with less economic risk.  The financial crisis and the response both by the Federal Reserve and Congress have both weighed on those indices.  Furthermore, Canada didn't have a severe recession like they did in the United States.  They had a fiscal crisis in the eighties and managed to reign in spending at that point and consequently they are not running as high deficits as they have in the United Sates.  They also have  lower corporate taxes, lower tariffs, moderate income taxes, a functioning immigration regime and a more federalized government that gives more power to the provinces than US states enjoy.

Oceania follows North America in economic efficiency.  Most countries in this region, with the exception of Indonesia, are very investor friendly.

The Middle East is in a statistical dead heat with Asia for the middle of the pack. South Asia, with India, Pakistan and Bangladesh bring down the Asia index. China is just above the regional average. The Middle East is trying to shed is authoritarian reputation and is showing big increases in economic freedom and opportunity. Many Middle Eastern countries are opening economically, including, Bahrain, United Arab Emirates, Oman and Israel.

Latin America follows the Middle East. Many in the region have been hoodwinked or bought off by the regional menace Hugo Chavez. Now there are a number of his sympathizers in power which is bringing the scores down considerably. There is hope in the Pacific with Chile, Peru, Colombia and Panama all showing significant improvement. Brazil, even though there economy has been surging recently, seems to score relatively poor and is placed even below Dominican Republic.

The biggest disappointment of course is the region with a whole host of pariahs, Sub-Saharan Africa. In fact, 18 of the bottom 26 countries belong to the region. There are some bright spots. Mauritius, an island off the coast of Madagascar, has proven to be investor friendly and is seen by many as a lassiez-faire gateway to the continent. South Africa, Botswana and Rwanda are sowing the seeds for future economic development and prosperity. The problem is, for every Botswana and Rwanda there is a Zimbabwe, Congo, Burundi, Angola, etc.