The $500 Billion dollar bailout that you never heard about

By EconomyPolitics - February 17, 2011
When George Bush first was informed about the 9/11 attacks, he was reading a children’s story to second graders. The attacks caught him off guard and interrupted his reading of My Pet Goat, and he sat perplexed as to how he should respond. Ben Bernanke was similarly blinded by the crisis even though lawmakers on capitol hill had on many occasions asked him about the possibility of a housing bubble caused by subprime mortgages.

Bernanke had his My Pet Goat moment in 2008, where in a panic, he lowered rates all the way down to zero. At least George had a military that he could send out to fight for him. Poor Ben’s options were limited, lower rates and print more money, which he did with the same sense of panic and righteous rage.

At the same time, America shifted from a marginal borrower to a marginal saver and savings rates became more important than borrowing. The Fed’s policy combination of free money with a steep yield curve invite the world to make us their patsy and allows banks to make a killing by lending to the government instead of underwriting loans.


If we can agree that the 0% short term rate put out by the Fed, is not a market rate, then what should it be? At 1%, the real rates are still not positive. An honest rate would have to be well above 1%. Increasing the rate would push up rates on your mortgage and car loans, but it would also allow you to not lose money in real terms by placing it in the bank. The Fed reduces borrowing costs, but only by screwing savers and investors. Again we see the bailout mentality of having the righteous pay for the wicked’s sins
Theft at the point of a gun

The CODI takes an average of three month term deposits and tends to very closely mirror average rates for demand deposits and the interest rate on short term savings.


The Federal Reserve controls the short term rates that banks give to each other. Then the banks give you, the depositor, the same “good deal” on your money. The money that responds directly to the Federal Funds rate is held primarily in checking, savings and demand deposit accounts. The amount of money in these accounts, which fetch a negative real rate of return, tops 6 Trillion.
Think of it as the banks do: the Fed forces us to lend our savings money to them for free. I would call it theft or a sleight-of-hand bailout. But the Fed doesn’t rob us themselves, they just allow the banks to. No matter what you call it, it destroys value in our savings based economy.

In my high school economics course (yes it was basic and my teacher was hot), one of the first things that we learned was that we always put our money in the bank instead of the mattress. The two reasons we shouldn’t place our money in a mattress is:
But fast forward to today and US banks are insolvent and savings accounts have a negative real return. That mattress looks like a more attractive investment alternative, (at least compared to a bank). 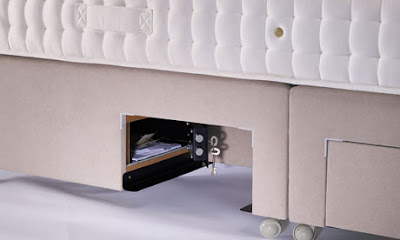 In fact, bed company Feather and Black has come up with The Safe Bed – a divan bed with a safe stuck in the base big enough to keep your cash, gold and bling bling. Now I really can’t think of a good reason why I should place my money in the bank.


Theft from other investors
Since long-term yields tend to bounce with the short end, if we look at the broader fixed income market, the Benjamins grabbing their ankles in real terms could be many times that. Just to give some perspective, the current US bond market has been estimated by SIFMA to be almost $36 Trillion, which includes corporate, government and agency, municipal, MBS ABS and CDOs. The yield on those investments are also held back by the Fed.
Why does this matter? Pension funds invest heavily in fixed income instruments. Many pension funds have been heading for the hills to escape from fixed income lately because they cannot get sufficiently high returns. They can’t even get the going inflation rate. Via Alta Assets:

12 per cent of [pension fund] investors reduced their fixed income allocations over the second half of 2010 as a result of bond market turmoil, which is expected to drop to a net decrease of 27 per cent within the next six months.

Since pension funds payouts are linked to inflation, this compounds our state solvency crisis. Illinois and California, with their gilded retirement pensions, would at least be in a better shape if their fixed income assets would at least keep up with their indexed liabilities.

The stimulus checks that never arrived


We said that rates need to be well above 1%. Cato’s Steve Hanke has called for short term rates to increase to 2% . If the Fed increases the short term rates to 2%, our deposit returns increase and we get more money in our pockets. You can see below the size of the money supply that directly responds to the Fed’s rate manipulation. The majority of money that would be affected would be savings deposits, but also demand deposits and checkable deposits. Just in 2010, an additional 2 points to the Fed Funds rate would have added $118 Billion into the pockets of depositors. 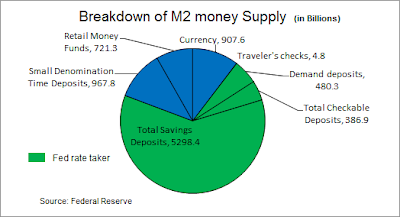 In the original stimulus, Bush and Congress mailed taxpayers $150 Billion via the IRS. If getting money into people’s pockets is so important, why ignore the stimulus effect of a positive real interest rate. Bernanke could raise rates in fifteen minutes like he said on 60 Minutes, and avoid all the bureaucracy of going through the hallowed arm of the IRS.

Not only could this be thought of as a bank bailout, but also as a stimulus that we never got. And it would work better because it would change expectations. Savings would increase.

If we look at 2009 stimulus foregone, and we have another $115 Billion lost opportunity. 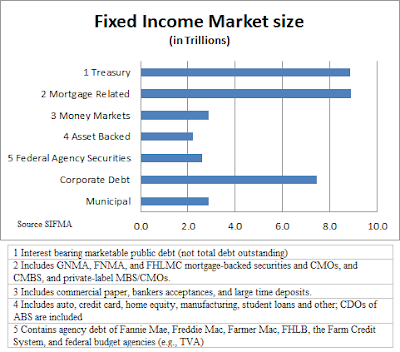 If you add the Trillions in fixed income investors, coming from everywhere from Granny to Calpers, and we estimate another $709 Billion in 2010 alone and another $692 Billion for 2009.  Add all those numbers up and we have investors getting the short end of the stick to the tune of over $1.6 Trillion (data via SIFMA).  To err on the conservative side, let’s keep the number honest and round way down to $500 Billion.  After all, the amount that fixed income investors would get could be much less because the yield curve could flatten, and because 2% might be too high (it could also be too low).  But $500 Billion is still greater than all the money that has been spent so far from Tarp plus the GSE bailout combined.


The reason it is important is because most people never miss what they never got. But, taking money and opportunity away from savers and investors to give to banks and borrowers destroys value and creates pension shortfalls. Putting a number on the madness helps us grasp the scope of the matter.
But judging what we hear from Bernanke and company, low rates are here to stay, at least until he has another My Pet Goat moment. Let's hope that's sooner rather than later.