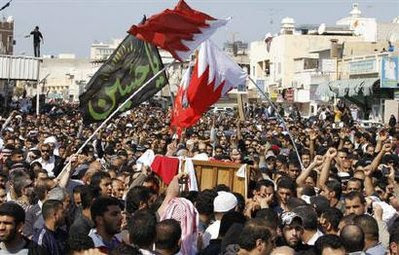 Not only Iran, the most autocratic been holding demonstrations, but also Bahrain as well.  Bahrain is one of the most prosperous, capitalist, free societies in the Middle East.  We will be following as this story breaks.  Via AP:


Thousands of protesters took over a main square in Bahrain's capital Tuesday — carting in tents and raising banners — in a bold attempt to copy Egypt's uprising and force high-level changes in one of Washington's key allies in the Gulf.

The move by demonstrators capped two days of clashes across the tiny island kingdom that left at least two people dead, parliament in limbo by an opposition boycott and the king making a rare address on national television to offer condolences for the bloodshed.

Security forces — apparently under orders to hold back — watched from the sidelines as protesters chanted slogans mocking the nation's ruling sheiks and called for sweeping political reforms and an end to monarchy's grip on key decisions and government posts.