Chart of the Day: Wood is more useful than wind and solar in meeting US current energy needs 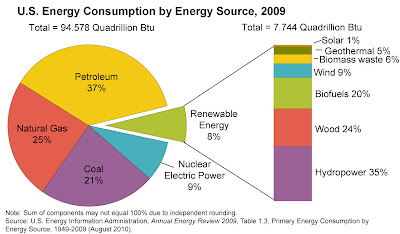 ﻿
The first chart explains the percent of our current energy consumption from the different sources.  Just note that the only really significant renewable is hydropower.  As far as making a dent in our total energy consumption, the two holy grails of energy, solar and wind, aren't even scratching the surface as far as total energy consumption.  The inconvenient truth is that both are heavily subsidized and currently are producing less energy than wood.  Wind energy, for all it is talked about still only makes up 0.72% - less than 1% -  of our national consumption.  Solar energy only accounts for 0.08%, which is not even one-thousanth part of our energy needs.  We have been subsiding solar energy since the 70s when Jimmy Carter threw up solar panels on the white house roof.  All that taxpayers money has evaporated as quickly as water in the desert.
﻿﻿
﻿﻿ 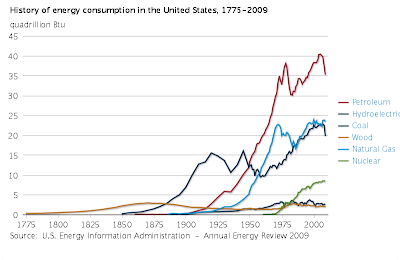 ﻿﻿ Energy consumption patterns have changed over the history of our country as we developed new energy sources and as our uses of energy changed. Wood is my favorite.  It has been a constant since the 1800s and is still use for heat and power generation.  It's use is growing like a weed.  In developed countries, wood energy is being increasingly used as an environmentally sound source of energy that provides a potential substitute for fossil fuels and has the ability to help reduce greenhouse gas emissions. In fact, it is only 30% off its peak use in the 1870s.  It still seems so Charles Dickens to me.  But, it's use is still way above solar and wind.  Eat that Al Gore.
﻿ 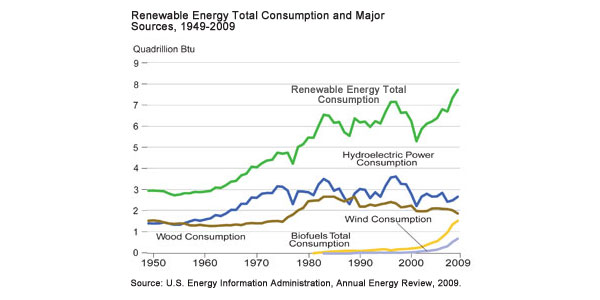 
Wood (a renewable energy source) served as the preeminent form of energy until the mid- to late-1800s, even though water mills were important to some early industrial growth. Coal became dominant in the late 19th century before being overtaken by petroleum products in the middle of the last century, a time when natural gas usage also rose quickly.

Since the mid 20th century, usage of coal has again increased (mainly as a primary energy source for electric power generation), and a new form of energy–nuclear electric power–has made an increasingly significant contribution. After a pause in the 1970s, the use of petroleum and natural gas resumed growth, and the overall pattern of energy usage since the late 20th century has remained fairly stable.

While the Nation's overall energy history is one of significant change as new forms of energy were developed, the three major fossil fuels–petroleum, natural gas, and coal, which together provided an average of 87% of total U.S. primary energy use over the past decade–have dominated the U.S. fuel mix for well over 100 years EIA's Annual Energy Outlook 2011 (AEO2011) Reference case, which assumes continuation of current laws, regulations, and policies, projects continued significant reliance on the three major fossil fuels through at least 2035, when they still provide over three-quarters of the Nation's overall primary energy supply. In the AEO2011, the total fossil fuel share of energy consumption decreases from 2009 levels, as renewable energy and nuclear electric power experience modest growth, and non-hydroelectric renewable energy more than doubles between 2009 and 2035. Changes in policies could, of course, lead to changes in this projection.

chart of the day EIA Energy