Employers only hire 36K in in January while unemployment falls to 9%: Why you should ignore the confusing employment numbers

By EconomyPolitics - February 04, 2011
Everyone is saying that the employment situation numbers are mixed and confusing.  One thing is certain, even though the rate comes down, there is no reason to rejoice.  We only added 36K jobs, while the expectation is for 150K jobs.  Meanwhile the unemployment rate goes down from 9.4% to to 9% while the consensus was for 9.5%.  What gives?

Stable employment numbers combined with a decreasing unemployment rate means that people are leaving the employment market likely because they are discouraged.   In fact, to drive that point home the labor force dropped by 504K.  Which means over one half of one million people gave up looking for work.

Today's report is weird in that so many other reports point to stable or increasing employment.  Severe winter weather may be to blame, but that seems like the excuse every is giving when things don't turn out as expected. 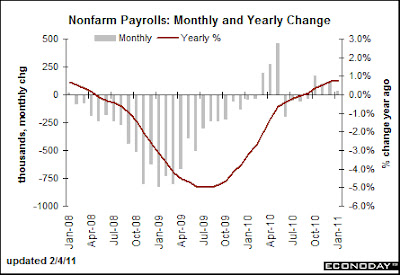