In spite of rising oil prices, supply of petroleum products remains high so any increase in demand could lead to squeeze

By EconomyPolitics - February 16, 2011
Commercial oil stocks rose 0.9 MM barrels in the February 11 week to 345.9 MM for the fifth straight build. The latest build is the smallest of the streak due to a drop in imports to a four-month low. Gasoline stocks rose 0.2 MM barrels for a seventh straight build. The build here reflects increasing output against flat demand. Distillate stocks fell a steep 3.1 million barrels for a third draw in the last four weeks. The draw reflects low output, the lowest in nearly a year, and a slight increase in demand. Supply of petroleum products remains very high in contrast to demand which, held back by high prices, is not showing much life.

Oil prices jumped 50 cents in initial reaction to the report then quickly settled back near $85.  Via EIA:

Winter heating oil expenditures for the average household in the Northeast are likely to be the highest on record despite Punxsutawney Phil’s prediction of an early spring this past Groundhog Day (February 2). Groundhog Day occurs near the midpoint of winter in the Northern Hemisphere, which runs from the winter solstice (the shortest day of the year, December 21 or 22) to the spring equinox (when the night and day are of equal length, March 20 or 21). The U.S. Energy Information Administration (EIA), on the other hand, defines the heating season as running from October through March, the months of the year in which population-weighted heating degree days (the average of daily low and high temperatures subtracted from the base of 65 degrees Fahrenheit) reach their maximum level. 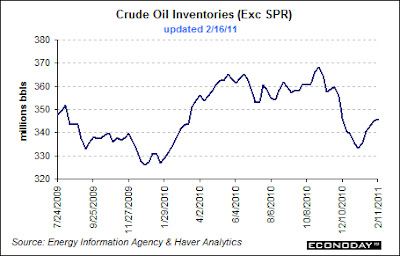