Maybe the job market is turning. That is what they are saying on a very upbeat jobless claims report for the Feb 5 week that shows a steep 36K decline in initial claims to 383K for the lowest total in 2-1/2 years (prior week revised 4K higher to 419K). The DOL said that most of the cold weather delays have already passed.  The four-week average also fell 16K to 415,500.
Continuing claims are clearly coming down which means tha the first half of the equation, firing, is has come down.  Now, we need increased hiring in what we previously saw was a dismal hiring period.

California was the oddball out, amidst a sea of lowering jobless claims as especially the South had lower jobless claims mostly from the construction industry. 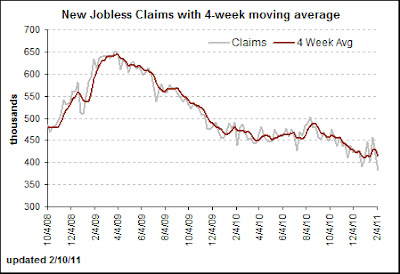