By EconomyPolitics - February 17, 2011
Jobless claims are showing that employment remains impossible to change by printing money.  Initial claims rose 25K in the February 12 week to 410K. The prior week was revised 2K higher to 385K, one of only two weeks this recovery that claims have been under 400K. The four-week average rose 1,750 in the latest week to 417,750 to show no significant change from mid-January in a comparison that doesn't point to improvement for the February employment report.  In fact, the jobless claims haven't improved since November.

Continuing claims have been coming down but only slightly and not in the latest data, up 1K to 3.911 MM in the Feb 5 week. The four-week average of 3.942 MM is down 73K from the month earlier. The unemployment rate for insured workers is unchanged at 3.1 percent. In data for the Jan 29 week, an unadjusted total of 9.25 MM Americans were claiming benefits, down about 108,500 from the prior week.

Snow and inclement weather may be blamed for the failure of initial claims to show improvement so far this year, which does hold out hope for the weeks ahead. Let's hope.  Otherwise, the jobs market remains a central risk to the economic recovery.  Via DOL

The advance seasonally adjusted insured unemployment rate was 3.1 percent for the week ending Feb. 5, unchanged from the prior week's unrevised rate of 3.1 percent. 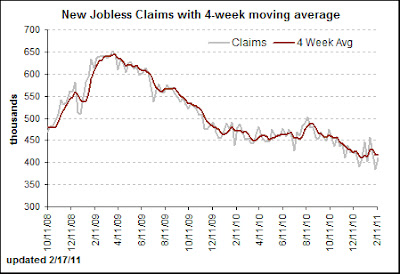