Nick Gillespie on why we can't balance our budget by raising taxes, and how to control spending

By EconomyPolitics - February 14, 2011
We can't raise taxes to get out of this recession because ultimately people respond to incentives and the revenues per GDP stop at 20%.  He repeats what I have said numerous times that you have to cut entitlements and military to get our budget in balance.  We will go broke otherwise.

We can start by taking our troops out of Europe.  I can't see any real reason why we have tens of thousands of troops in the UK, France and Germany.  Then we raise the retirement age for social security to seventy to those under 40.  We create death panels for medicare and cut gross receipts by 10%.  Finally, we cut non-defense descretionary spending to 2000 levels.  Via Reason:


Unfortunately, the plans produced to date are severely lacking. The Tea Partiers’ hearts may be in the right place, but the decentralized movement has yet to deliver any specifics. The GOP pledge is a laughable and already forgotten document, explicitly ruling out cuts in military spending (one of the biggest budget items) and implicitly taking other big-ticket items such as Medicare and Social Security cuts off the table as well. Under the best of circumstances, Paul Ryan’s plan, pilloried by detractors as “radical,” does not balance the budget until 2063. Radical, that ain’t.

...any plan that relies on significantly raising average annual federal revenue is based on fantasy. Since 1950 annual federal revenue has averaged 17.8 percent of GDP, fluctuating within a relatively narrow range (see Figure 1). Despite endlessly creative attempts to squeeze more dollars out of taxpayers, the feds haven’t been able to pull in much more than that on a regular basis.

...If we were going to peg future outlays to a budgetary baseline from the past, we would do far better to use the 2000 federal budget as a guide. The final year of the last century was a pre-recession year, and it is recent enough to dismiss any complaints that everyday life has changed dramatically since then. Few people were complaining at the turn of the century that our federal spending was at a dangerously low level that did not support the needs of the nation. 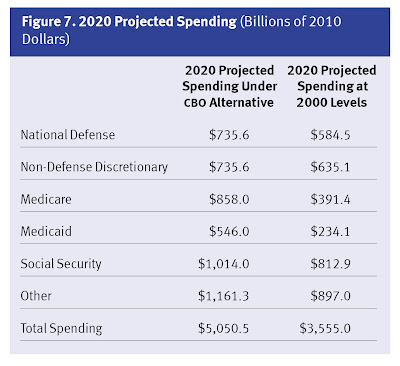