PPI for finished goods up 3.6% YOY

By EconomyPolitics - February 16, 2011
Despite the Fed’s blind denial, wholesale and core inflation is bumping up for the seventh straight rise in finished goods prices.  The problem lies in the wholesale goods that averaged above 3% YOY since September.  When wholesale rises, rises in finished goods can’t be far behind. Via BLS:


The Producer Price Index for finished goods rose 0.8% in January, seasonally adjusted, the U.S. Bureau of Labor Statistics reported today. This advance followed increases of 0.9% in December and 0.7% in November and marks the seventh straight rise in finished goods prices. At the earlier stages of processing, prices received by manufacturers of intermediate goods moved up 1.1%, and the crude goods index rose 3.3%. On an unadjusted basis, prices for finished goods advanced 3.6% for the 12 months ended January 2011.

By components, food prices increased 0.3%, after a 0.8% boost in December. The energy component remained red hot, jumping 1.8% after surging 2.8% in December. The usual suspects were not behind the surge in the core rate. Nearly forty% of the January advance can be traced to the index for pharmaceutical preparations, which moved up 1.4%. Higher prices for plastic products also contributed to the rise in the finished core index. The usual suspects were relatively tame. Passenger car prices dipped 0.1% while light trucks rose a moderate 0.2%. And tobacco edged up only 0.1%. 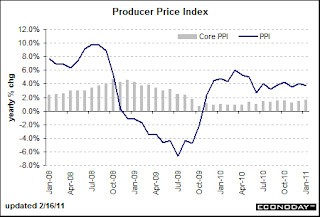