Weekly Jobless claims turning a corner and drop below 400K

By EconomyPolitics - February 24, 2011
Jobless claims data are finally turning the corner and falling below the psychologically important 400K.  Initial claims for the Feb 19 week fell 22K to 391K.  The 4 week average shows considerable improvement, falling a sizable 16.5K 402K for a nearly 30K decline from the month-ago level. 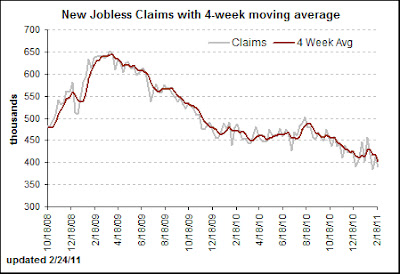