By EconomyPolitics - March 03, 2011
Uh oh.  The US employment as measured by Gallup seems to be increasing as the others are decreasing.   This is inconvenient and doesn't go along with the other data that we have seen.  We will continue to monitor.  Via Gallup:

Unemployment, as measured by Gallup without seasonal adjustment, hit 10.3% in February -- up from 9.8% at the end of January. The U.S. unemployment rate is now essentially the same as the 10.4% at the end of February 2010. 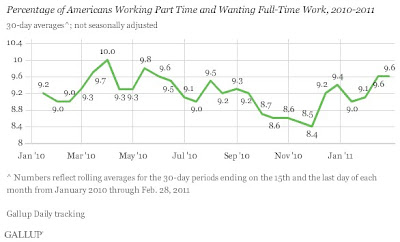 Underemployment, a measure that combines part-time workers wanting full-time work with those who are unemployed, surged in February to 19.9%. This resulted from the combination of a sharp 0.5-point increase since the end of January in the percentage unemployed and a 0.5-point increase in the percentage working part time but wanting full-time work. Underemployment is now higher than it was at this point a year ago (19.7%). 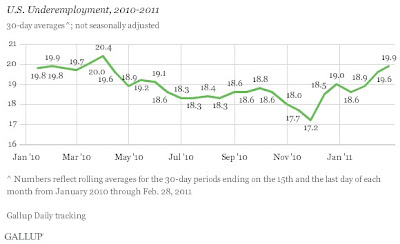