Is the US dollar is near the end of its reign as the world's monopoly currency? Probably

Barry Eichengreen, who is a Berkley professor at Yale argues in today's WSJ that the dollars reign is as the de-facto world's currency are on it's last legs.  His article is titled Why the Greenbacks Reign is near an End.  This goes along with what we have been saying here for some time.

It may sound very "duh", but the dollar's reign eventually will come to an end sometime.  To borrow Zero Hedge's tag line: on a long enough timeline, the survival rate for everyone drops to zero.

The dollar's monopoly status will one day fall, just like one day, the US will default on it's debt. It may happen in five years, it may happen in twenty, or maybe not during our lifetimes.

Eichengreen is arguing that the end is near, at least for the greenbacks default status as the global currency.  And, the US will suffer from not being able to print more money without creating price inflation.  But on the flip side, it will allow the US to start saving and exporting more because the amazing current account deficits (and capital account surpluses) will be near impossible with the draw down of the foreign reserves, because as any econ student will tell you the balance of payments formula (simplified):   [current account] equals  [capital account] plus [net change in reserves].  Via WSJ:

The greenback, in other words, is not just America's currency. It's the world's.

But as astonishing as that is, what may be even more astonishing is this: The dollar's reign is coming to an end.

I believe that over the next 10 years, we're going to see a profound shift toward a world in which several currencies compete for dominance.

The impact of such a shift will be equally profound, with implications for, among other things, the stability of exchange rates, the stability of financial markets, the ease with which the U.S. will be able to finance budget and current-account deficits, and whether the Fed can follow a policy of benign neglect toward the dollar.

There are two competing philosophies.  First is that there is a natural tendency towards monopoly in currencies, much the same way that there is a natural tendency toward a common language for commerce.  A dominant currency provides needed liquidity and consequently low bid-ask spreads reducing the cost of hedging currency risk.  Additionally, small countries especially could run into liquidity concerns if the domestic market was not sufficiently liquid for large transactions.  Furthermore, attracting international borrowers for government and corporate debt becomes increasingly difficult the lower the liquidity of the currency. 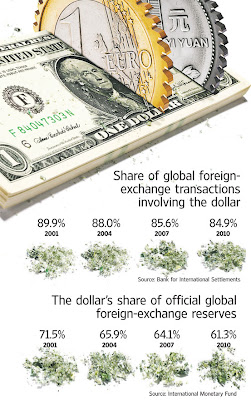 On the other hand, competition among currencies is inevitable and desirable, as the entire world's economy becomes increasingly exposed to a group of balding PhDs at the Federal reserve.  If the Fed were to inflate its currency in the effort to increase irresponsible spending and debt, the ripple effects would be felt from New Zealand to Nigeria.  A basket of currencies for both foreign reserves and transactions would take away some of the unique risk of  a single currency, and ultimately would be more stable.

The real question that needs to be asked is, if there is a natural monopoly, does it have to be the dollar?  Of course the answer is no as during the 19th century it was the dominance of the pound sterling.

But it is possible for the US dollar to be taken off its lofty perch.  The UK can attest to the fact that even before World War II, the Pound Sterling had lost much of its luster as the US dollar became the dominant currency.  It could happen again, but this time because of technology.


First, changes in technology are undermining the dollar's monopoly. Not so long ago, there may have been room in the world for only one true international currency. Given the difficulty of comparing prices in different currencies, it made sense for exporters, importers and bond issuers all to quote their prices and invoice their transactions in dollars, if only to avoid confusing their customers.

Second, the dollar is about to have real rivals in the international sphere for the first time in 50 years. There will soon be two viable alternatives, in the form of the euro and China's yuan.


Americans especially tend to discount the staying power of the euro, but it isn't going anywhere. Contrary to some predictions, European governments have not abandoned it. Nor will they. They will proceed with long-term deficit reduction, something about which they have shown more resolve than the U.S. And they will issue "e-bonds"—bonds backed by the full faith and credit of euro-area governments as a group—as a step in solving their crisis. This will lay the groundwork for the kind of integrated European bond market needed to create an alternative to U.S. Treasurys as a form in which to hold central-bank reserves.

See the total amount of dollars in Federal Reserve.  The real story here is the growth of unallocated reserves that are marked in dollars but undisclosed to their true composition.  Odd's are, dollars make up a lower percentage of reserves in undisclosed reserves as they do in the allocated reserves.  Also, notice the growth in the Euro reserves.  They are eating into some of the dominance of the US dollar's gold plated status.
Dollar Euro IMF In focus SDR yuan