By EconomyPolitics - March 11, 2011
The exact figure, $8.854 TT for M2, represents an increase over last week. More importantly, the four week average is at an all time high again of $8.878, although slightly off last weeks number which was revised downward. Money supply is up almost 5.25% over the last year and 80% over ten years. 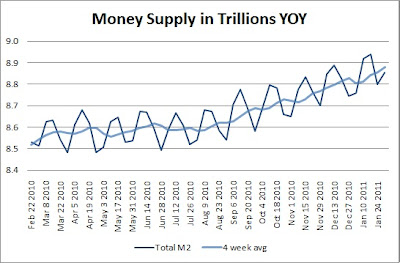 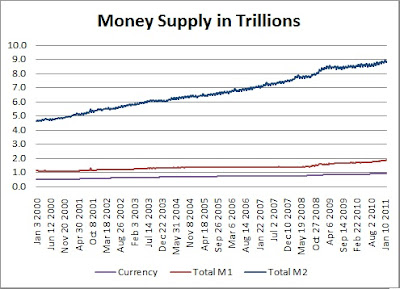 The most damning chart shows how the Federal Reserve has been able to print money without adding to inflation.  You print the money, give it to the foreign central banks as reserves, and, since its out of circulation, it is never used to bid on real goods and thus create inflation.  This money growth won't show up in M2.  This money, in our opinion, is the biggest threat to hyperinflation there is.

The real question you ask yourself is what happens if the US loses its luster as a reserve currency, or what happens if an emerging markets crisis forces some central banks to sell off their dollar positions?  Putting these dollars back into circulation would lead to a 25% increase in available dollars almost overnight.  The US would instantly have the highest inflation on the planet.  Even higher than Zimbabwe, which seems to have stopped printing money for the time being.