Bill Gross acknowledges that the US will default on its debt

By EconomyPolitics - April 14, 2011
Bill Gross admits what we have been saying for some time.  The US is broke.  Yes, debt is bad, but it is the unfunded liabilities that really are breaking our necks.  The three wicked sisters, Medicare, Medicaid and Social Security now account for 44% of total federal spending and are steadily rising.  The Dallas Fed puts that liability at a present value of $104 TT, yes that is 104 Trillion dollars.

Bill Gross put that number at a very conservative $65 TT, which means the US's real debt burden is over 75 Trillion dollars.  That is a very conservative number folks.  But even that number means that the US is bankrupt.
Past administrations, such as Bush Jr, tried to partially privatize Social Security to save it.  That would have been a great first step.  It was kaiboshed by the congressional democrats.  Now, we cannot preserve it in its present form without bankruptcy.

Gross seems to think that we will default, but not in the traditional sense.  We will default when we try to inflate our way out of this current mess.  Negative interest rates are another way that they can default by stealing money from savers and giving to borrowers.  Via Pimco:

That adorable skunk, Pepé Le Pew, is one of my wife Sue’s favorite cartoon characters. There’s something affable, even romantic about him as he seeks to woo his female companions with a French accent and promises of a skunk bungalow and bedrooms full of little Pepés in future years. It’s easy to love a skunk – but only on the silver screen, and if in real life – at a considerable distance. I think of Congress that way. Every two or six years, they dress up in full makeup, pretending to be the change, vowing to correct what hasn’t been corrected, promising discipline as opposed to profligate overspending and undertaxation, and striving to balance the budget when all others have failed. Oooh Pepé – Mon Chéri! But don’t believe them – hold your nose instead! Oh, I kid the Congress. Perhaps they don’t have black and white stripes with bushy tails. Perhaps there’s just a stink bomb that the Congressional sergeant-at-arms sets off every time they convene and the gavel falls to signify the beginning of the “people’s business.” Perhaps. But, in all cases, citizens of America – hold your noses. You ain’t smelled nothin’ yet.

I speak, of course, to the budget deficit and Washington’s inability to recognize the intractable: 75% of the budget is non-discretionary and entitlement based. Without attacking entitlements – Medicare, Medicaid and Social Security – we are smelling $1 trillion deficits as far as the nose can sniff. Once dominated by defense spending, these three categories now account for 44% of total Federal spending and are steadily rising. As Chart 1 points out, after defense and interest payments on the national debt are excluded, remaining discretionary expenses for education, infrastructure, agriculture and housing constitute at most 25% of the 2011 fiscal year federal spending budget of $4 trillion. You could eliminate it all and still wind up with a deficit of nearly $700 billion! So come on you stinkers; enough of the Pepé Le Pew romance and promises. Entitlement spending is where the money is and you need to reform it. 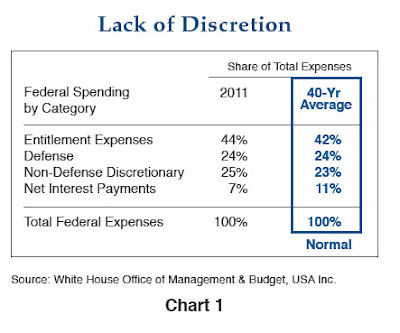 Even then, the situation is almost beyond repair. Check out the Treasury’s and Health and Human Services’ own data for the net present value of entitlement liabilities shown in Chart 2. 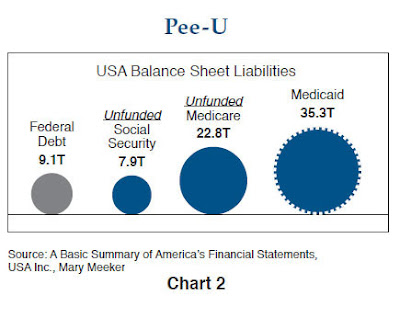 The above four multi-trillion-dollar liability balls are staggering in their implications. Remember first of all that the nearly $65 trillion of entitlement liabilities shown above are not some estimate of future spending. They are the discounted net present value of current spending should it continue at the projected demographic rate (importantly ­– it is much higher than the annual CPI + 1% used as a discounter because demand for healthcare rises much faster than inflation.) And while some Honorable Congressional Le Pews would counter that Medicaid is appropriated annually and therefore requires no discounted reserve, those words would surely count as “sweet nothings,” believable only to those whom they romance every several years at the polls. The incredible reality is that the $9.1 trillion federal debt that constitutes the next-to-tiniest ball in our chart is nothing compared to unfunded Medicaid and Medicare. It is like comparing Pluto to Saturn and Jupiter. The former (the $9.1 trillion current Treasury debt) does not even merit planetary status in our solar system of discounted future liabilities. It’s really just a large asteroid.

Look at it another way and our dire situation becomes equally revealing. Suppose that the $65 trillion of entitlement liabilities were fully funded in a “lockbox,” much like Social Security is falsely imagined to be. Just suppose. And say the cost of that funding (Treasury debt) was the same CPI + 1% that was used to produce the above discounted present value in the first place. Actually, that’s not a bad guesstimate for the average yield of all Treasury debt. If so, then the interest expense on the $75 trillion total debt would equal $2.6 trillion, quite close to the current level of entitlement spending for Social Security, Medicare and Medicaid. What do we pay now in interest? About $250 billion. Our annual “lockbox” tab would rise by $2.35 trillion and our deficit would be close to 15% of GDP! The simple conclusion would be this: Unless you want to drastically reduce entitlement spending or heaven forbid raise taxes, then Pepé, you’ve got a stinker of a problem.

Previous Congresses (and Administrations) have relied on the assumption that we can grow our way out of this onerous debt burden. Perhaps we could, if it was only $9.1 trillion, as shown in Chart 2. That would be 65% of GDP and well within reasonable ranges for sovereign debt burdens. But that is not the reality. As others, such as Pete Peterson of the Blackstone Group and Mary Meeker, have shown much better and for far longer than I, the true but unrecorded debt of the U.S. Treasury is not $9.1 trillion or even $11-12 trillion when Agency and Student Loan liabilities are thrown in, but $65 trillion more! This country appears to have an off-balance-sheet, unrecorded debt burden of close to 500% of GDP! We are out-Greeking the Greeks, dear reader.

If so, and if the USA were a corporation, then it would probably have a negative net worth of $35-40 trillion once our “assets” were properly accounted for, as pointed out by Mary Meeker and endorsed by luminaries such as Paul Volcker and Michael Bloomberg in a recent piece titled “USA Inc.” However approximate and subjective that number is, no lender would lend to such a corporation. Because if that company had a printing press much like the U.S. with an official “reserve currency” seal of approval affixed to every dollar bill, that lender/saver would have to know that the only way out of the dilemma, absent very large entitlement cuts, is to default in one (or a combination) of four ways: 1) outright via contractual abrogation – surely unthinkable, 2) surreptitiously via accelerating and unexpectedly higher inflation – likely but not significant in its impact, 3) deceptively via a declining dollar– currently taking place right in front of our noses, and 4) stealthily via policy rates and Treasury yields far below historical levels – paying savers less on their money and hoping they won’t complain.

If I were sitting before Congress – at a safe olfactory distance – and giving testimony on our current debt crisis, I would pithily say something like this:

“I sit before you as a representative of a $1.2 trillion money manager, historically bond oriented, that has been selling Treasuries because they have little value within the context of a $75 trillion total debt burden.

Unless entitlements are substantially reformed, I am confident that this country will default on its debt; not in conventional ways, but by picking the pocket of savers via a combination of less observable, yet historically verifiable policies – inflation, currency devaluation and low to negative real interest rates. Our clients, who represent unions, cities, U.S. and global pension funds, foundations, as well as Main Street citizens, do not want to be shortchanged or have their pockets picked. It is incumbent, therefore, in order to preserve the integrity of the U.S. Treasury market along with its favorable global interest rates, and to promote a stable U.S. economy, that entitlement spending be reduced, and that future liabilities be addressed in terms of healthcare and Social Security cost containment. You must attack entitlements and make ‘debt’ a four-letter word.”

Thank you, and like Pepé Le Pew, why don’t you try changing your stripes or at least pretend you’re a French-speaking cat. The odor in these chambers is all too familiar and a skunk needs all the help it can get.