By EconomyPolitics - April 01, 2011
In what could be seen as a good April Fools joke, the finance minister gets asked about the Irish debt situation, the Portuguese debt situation, but scarcely asking about their own debt situation.   He says that the Greek Deficits will not be reduced before 2013.

No wonder, the Greek to German spreads are as high as they have ever been.  This governments is in serious denial. 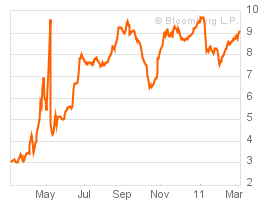