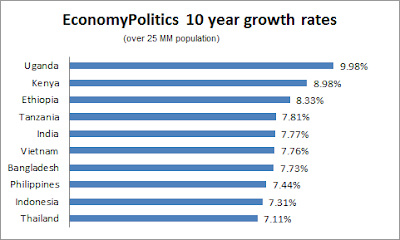 This is the second in a three part series where we identify the most attractive international investment opportunities for the next ten years. We start out by looking at economic efficiency, i.e. the fundamental freedoms and legal framework, which facilitates successful investing. Second we look at growth rates and finally we look at places where economic opportunity will be taking place.
When you look at future growth rates, it is a function of economic freedom, population growth and GDP per capita. All other things equal, high economic freedom, high population growth and low GDP per capita, both lead to high economic growth.
EconomyPolitics Methodology
Estimating next year’s GDP growth is hard to get right. To an investor looking to place capital, it is easy to confuse next year’s economic growth with long term potential. As we are no likelier than the next economist to “get it right” in the short term, we have chosen to focus on longer–term trends, i.e. the ten year growth rates, which in the end dominate.
We forecast how long it would take for a country to reach the prosperity level of the United States as measured by GDP per capita. We estimate that if a country is free and open, they may become on par to the United States in GDP per capita in 40 years. After World War II, Europe was poor and destitute and its infrastructure was destroyed, but it was relatively free and open for business. Many of the more open ones caught up in terms of GDP per capita to the United States in about 40 years.
We use the 40 year as an anchor and assume that any country that is free and open will catch up in 40 years. The lower the GDP per capita, the faster the growth. We also make adjustments for population growth and economic efficiency.
So where are the places that will grow the most over the coming decade? The continent that stands as a bright spot for growth is Africa. This is the third consecutive year that we have highlighted Africa as a continent of hope.

The region that should grow fastest is Africa. We have projected the 10 year growth rate for Africa at 5.09%. Africa’s young population is growing fast, they are very poor and they are finally starting to end the cycle of war and replace it with a system of good governance. All those things increase economic growth and bode well for economic growth.
Asia follows close behind. They come in at 4.71%. Their population growth comes in lower than Africa, and their standard of living is greater, but they also have a greater degree of economic efficiency.
The Middle East follows at came in a 4.20%. Will the region’s recent turmoil blossom into good governance or continue more of the same. Early indications do not support a blossoming of representative government, but, the truth is no one knows the outcome of Egypt and the rest of the Arab world will look like in ten years.
Latin America follows at 3.88. They have dropped off recently due to undemocratic moves in Venezuela, Bolivia, Nicaragua, Ecuador and Argentina. Peru remains a bright spot, with their recent election of Ollanta Humala who has governed much better than expected. So the region remains mired in their unwarranted dreams of benevolent caudillos.
Oceania follows mostly because growth in Indonesia is pulling the rest of the countries up and finishes at 3.75%. Singapore is pulling their index down. It’s not that Singapore won’t have economic growth, its that since they are at the top, there is not room to play catch up.
The developed world sees less room for economic growth than does other parts. They also fare much worse in terms of debt and unfunded liabilities, both of which are weighing on the markets. The Eurozone index factos this into the equation which is why there is low growth expect both in Europe and North America. Europe’s expected growth is 1,76%, but it is a mishmash of the heavily indebted PIIGS which lower growth and Eastern Europe which raise growth. North America’s expected growth comes in slightly higher at 1.99, but the region is the least diverse and only of the US, Canada and Haiti.
Regional Data
Africa average 5.09%

For media inquiries into the EconomyPolitics Index of Economic Efficiency, please contact economipolitics [at] gmail [dot] com. Please feel free to use the full index, but must source back to EconomyPolitics.
10 Yr Growth Rates Final 2112